When Casting Jewelry Details, Only the EnvisionTEC 3D Printer Will Do

EnvisionTEC is the best 3D printer for the jewellery industry for building castable patterns that require detail such as pave and millgraining.

Read the below case study to know more.

In 2011, the Jewelry Design Center in Spokane, Washington (USA), made the leap to 3D printing with the Perfactory Aureus from EnvisionTEC.

The 39-year-old company was already the largest full-service jewelry and watch store in the Northwest. But the venture into 3D printing has helped the company expand its custom jewelry business and deliver models faster for customers, helping to transform overall operations. The company recently opened a second location in nearby Kennewick, partly due to growth in its custom jewelry business.

Today, the jewelry team regularly runs its Perfactory Aureus - one of EnvisionTEC’s best-selling 3D printers for the production of customized jewelry - to print patterns that will eventually be casted and crafted into beautiful bejewelled designs. (Said “Brian Toone” - Owner of the Jewelry Design Center Spokane and Kennewick, Washington) 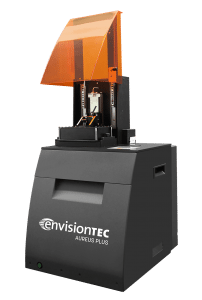 We use it every night,” said Jon Nowaski, a CAD specialist who manages 3D printing and production at the center. “Sometimes, we do two shifts a day.” Nowaski uses CAD to create a piece of jewelry, such as the ring shown above and then transforms it into a finished casted piece, offering a wide range of metals and jewels.

Back in 2011 when he bought it, Toone recalled, he thought the Aureus was expensive, but he wanted to go for top-of-the-line 3D printer that was proven in the market. Today, he notes that Aureus was well worth it, calling it “incredibly reliable.”

The Jewelry Design Center primarily prints in EnvisionTEC’s EC500 material, which delivers detail at 25 microns resolution on the Aureus. It also has a melting point of 250 degrees Celsius, which means zero ash content on a complete burnout when creating an investment casting.

Within EnvisionTEC’s library of castable materials for the jewelry market, EC500 is also known for its print speed. Up to 15 rings can be made in 5.7 hours, lending itself to easy overnight production.

Today, the Jewelry Design Center does everything from custom rings and pendants to bangles.

In 2011, Nowaski estimated the company did 30 custom jewelry jobs a month, but today, it averages 70, with spikes during holidays.

The company also has deepened its commitment to 3D printing recently with the purchase of a 3D scanner. Now, in addition to scanning cherished heirlooms to preserve files, the center can scan organic shapes like leaves, which it can then replicate through 3D printing. Mimicking those designs would have been very difficult in the past without highly experienced artists carving wax.

Being a progressive jewelry company, the Aureus isn’t the company’s only 3D printer either. The Jewelry Design Center also owns a Formlabs 3D printer, but they don’t use it for final castable models. Toone said that lower-priced machine is used only to show customers a quick plastic prototype before they make a final print on the Aureus.